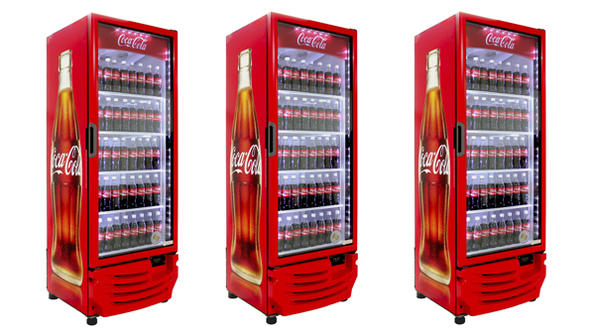 In January 2014, the Coca-Cola Company announced that it hadinstalled its 1 millionth hydrofluorocarbon (HFC)-free cooler using natural refrigerant in the marketplace, preventing the emission of 5.25 million metric tons of CO2 over 10 years. This milestone marks significant progress in the Company effort to phase out the use of HFC refrigerant a well known contributor to climate change in Coca-Cola dispensers, vending machines and coolers globally.

Together with its bottling partners, the Coca-Cola established a goal that all new cold-drink equipment will be HFC-free by 2015. Achieving this goal will prevent the emission of more than 50 million metric tons of CO2 over 10 years, an amount equivalent to the annual emissions of more than 10 million passenger vehicles. Coca-Cola has improved its cooling equipment energy efficiency by 40 percent since 2000; and eliminated 75 percent of direct greenhouse gas (GHG) emissions by transitioning to HFC-free insulation foam for new equipment.

The Coca-Cola Company has been able to improve the efficiency of its refrigeration equipment and to reduce greenhouse gas emissions produced by this equipment. Some of the results include:

– Improving the energy efficiency of its cooling equipment by 40 percent. A large part of the progress is due to the company work developing an intelligent EMS that delivers energy savings of up to 35 percent when placed on its equipment.
– Transitioning to HFC-free insulation foam for new equipment, eliminating 75 percent of direct GHG emissions as compared to traditional refrigeration equipment.
– Identifying a natural refrigerant gas, CO2, to replace HFC refrigerant gas and are phasing out the use of HFCs in all new equipment by 2015.
– Coca-Cola has over 550,000 units of HFC-free refrigerated equipment in use throughout its system. The company recently executed a significant new CO2 compressor supply agreement, which will enable it to triple its use over the next two years.

The Coca-Cola Company collaborates with peer companies, NGOs, government officials, customers and others to identify the areas where it can improve the overall energy efficiency of its cooling equipment and phase out the use of harmful F-gases in its equipment. Through these efforts, The Coca-Cola Company has been able to help its customers  many who operate in highly-populated urban areas and some who are starting new businesses effectively manage and often reduce the energy use from coolers in their stores.

Potential for scaling-up and replication

In addressing climate change, The Coca-Cola Company has pursued collaboration opportunities with peer companies, NGOs, government officials and others. For example, the company coordinated a Sustainable Refrigeration Summit, bringing together diverse companies to explore more rapid adoption of natural, HFC-free refrigerants. That summit laid the groundwork for The Consumer Goods Forum pledge to start phasing out HFC refrigerants by 2015. The Forum commitment was announced in November to coincide with the United Nation Climate Change Conference in CancĂşn, Mexico (COP16).

The Coca-Cola Company is moving forward to be 100 percent HFC-free for new equipment purchases by 2015. They have also placed over 4.3 million energy management devices, reducing their customers energy consumption by an estimated 4.1 billion kWh/year saving them approximately $336 million/year and delivering corresponding emissions reductions of approximately 2.4 million metric tons/year.  Over the past decade, the company has invested more than USD $60 million in research and development to advance the use of climate-friendly, HFC-free cooling technologies.

As a result of the Coca-Cola system’s commitment to eliminate the use of HFCs in its equipment, carbon emission reductions will exceed 52.5 million tons over the life of the equipment the equivalent of taking more than 11 million cars off of the road for one year.